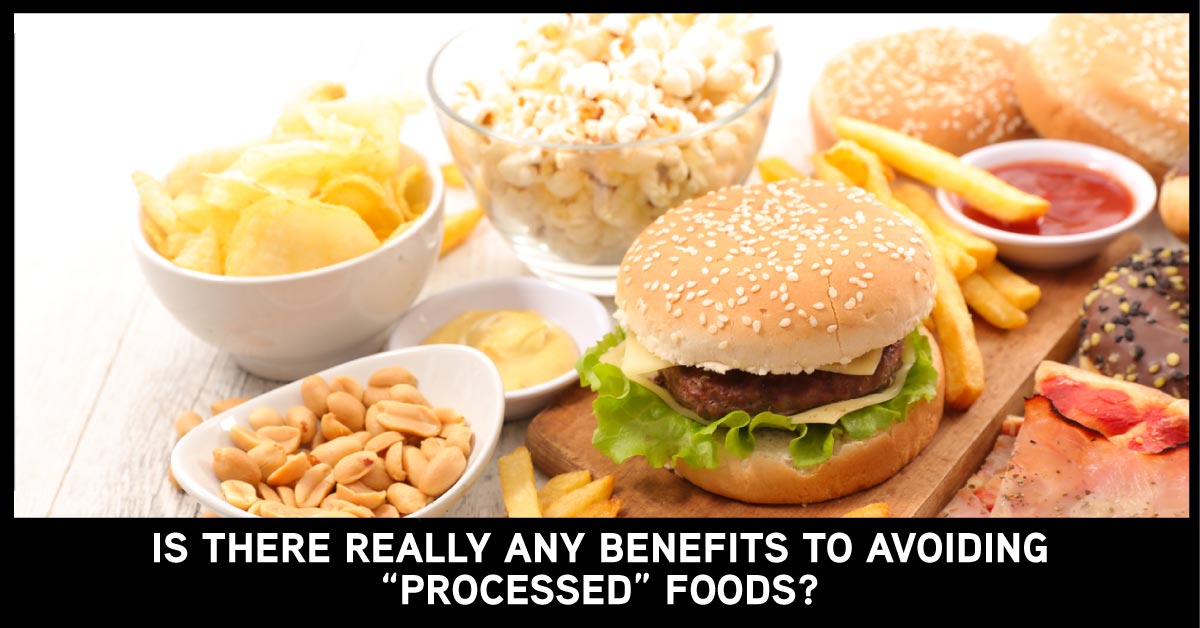 I’m guessing that when the word “unhealthy” showed up on that list, you didn’t blink an eye or think it was out of place. Because, even though it’s nothing like the words around it, we’re conditioned to think terms like “processed” and “unhealthy” go together like two peas in a plastic bag.

And the term “processed” is so broad and vague that we can use it to describe anything we hate or distrust. Here’s the best definition I could find: Food that is changed or preserved by “a series of mechanical or chemical operations” [8]. Obviously, that could apply to literal tons of things we eat every year. So, if processed foods are as “unhealthy” or as dangerous as the headlines make them sound, shouldn’t we start burying them with our radioactive waste?

If you get nothing else from this article, you’re going to remember forever that it’s not that simple.

Somewhere, there’s a candlelit, tea tree scented room filled with portraits of raw kale and a mountain of research papers condemning processed foods. Of this I am certain.

Because, if you skim the science on processed foods, you’ll feel smothered by dismal conclusions: Processed food intake has been on the rise for decades, and it correlates with increases in overweight/obesity [1], metabolic syndrome [2], diabetes [3], and clowns [?].

Okay, I made that last one up.

But the rest of it is true. These problems plague not just Americans, but much of humanity, contributing to the major causes of death in many first-world nations [4]. And they seem to walk hand-in-hand with how much processed food we eat. Whatever we’re doing to our food, it must be really, really bad. Right?

Maybe not. There are big flaws with lots of the studies that correlate processed food consumption and disease—things you’d probably miss if all you saw were headlines: Almost all these studies conveniently ignore or downplay a pesky reality—calories.

While processed food consumption has been on the rise (up 142%) since the 1960s [5,6], so have overall calories [7]. And yet, so many of the studies looking for the connection between processed foods and disease skip over this fact, or don’t consider it a central problem.

Let me shout it from the rooftops: You cannot gain weight without eating a surplus of calories! So, here’s the problem: If you read a study or news story that says, “People are becoming obese because they eat more processed food than before,” it’s very likely you’ll think that the word “processed” is the issue and start avoiding something that doesn’t really matter. Because the fact that a food is processed tells you nothing about its calorie content. Here’s a more accurate sentence: “People are becoming obese because they eat more FOOD than before.” Period. Exclamation point.

And it’s true: Since 1971, while obesity rates have approximately tripled, energy intake has steadily gone up by about 200-300 calories per day [7]. That might sound small, but think of it this way: the whole of America has been in a 200-calorie surplus for more than 40 years. That’s a little more important than the fact that more of our food is chopped, packaged, frozen, or fried.

Meats, Cancers, and the Lie of Relative Risk

There’s also a big, cancerous elephant in the room.

In 2015, the World Health Organization put out a press release warning that processed meat was associated with an increased risk of colorectal cancer [10]. And the headlines went wild. They weren’t wrong, and their statement was based on research showing that colorectal cancer went up by 18% for every 50g of processed meat eaten per day, on average [11].

Except that’s a lie. Because that 18% is an increase in relative risk. Without getting too technical, this means it’s a fraction of 4.5%, not an additional 18%. So, the risk only goes up to 5.31%. It’s up to you to decide if that’s a big deal, but it’s clear that most of the hype over the WHO’s announcement has been misinformation or blatant fear-mongering. (And, if anyone had cared to notice, even while processed food intake has been increasing, rates of colorectal cancer have been declining for decades [12]. Just saying.)

It’s always tempting to run when experts cry “cancer!” But again, it’s not that simple. And I know you already agree with me, because…

(and if you’re an anti-processed-foodie, you might want to fasten your seatbelt for this next part…)

… Have you ever tried alcohol? It’s great. And I’m willing to bet most people—even those who scorn processed foods—drink it regularly. Do they care that it’s about as “processed” as a food can be? Think about it: a natural, happy little grain or fruit got captured, squashed, fermented, and ultimately bottled as a liquid neurotoxin. Are they phased at all by the fact that alcohol’s effect on cancer risk blows processed meat out of the water [9]? I’m guessing not.

The thought goes more like this: “Ew, processed foods! Oooh, bottomless mimosas… what were we talking about?”

This point isn’t just about hypocrisy—it’s about recognizing that not everything that sounds scary actually is, and not everything with the word “cancer” attached to it is worthy of our attention or fear. Deep down, I know we all “get it”: moderation is king. But sometimes we forget.

“Okay,” you concede. “Maybe processed foods aren’t as bad as I thought. But they’re still not good for you. Even if the downsides are small, shouldn’t I still avoid them?”

Maybe it wouldn’t be such a bad idea to avoid or limit processed foods. Some people are more than capable of doing that. For others, there’s the problem of adherence—something we’ll talk about in the next section.

But for now, you’re still assuming there’s no upside to processed foods—I mean, besides convenience and the hyperpalatable magic of mac-n-cheese.

And that’s just not true.

Processed foods have risen out of necessity. They were necessary to free women from the servitude of constant cooking, allowing them to participate in the workforce; they’re necessary to feed starving nations around the world; and, keeping it closer to home, you might be surprised by how much they offer us in terms of nutrition.

A study that examined the largest nutrition survey data from 2003-2008 found that processed foods provided—get this—55% of all dietary fiber, 48% of calcium, 43% of potassium—yes, I’m going to keep going—34% of vitamin D, 64% of iron, 65% of folate, and 46% of vitamin B-12 in the average American diet [8]. Fortifying and enriching foods has had a big, positive impact on the quality of our nutrition.

Is that the whole truth? No—of course there were downsides. Processed foods also contributed more than half of all calories, saturated fat, added sugars, and sodium. But the point is: It’s not as simple as “good for you” and “bad for you.”

The Problem with Boogeymen

It’s worth mentioning that we’ve been processing food for thousands of years, not because it makes boring foods awesome, but because we had to. Most of the best protein sources are animal products we couldn’t eat without cooking (aka, processing). Even if it’s not for safety, some of the best things in life are made possible by processing. Take olives: a basically inedible fruit can be soaked in lye (a dangerous alkali) and transformed into a delicious snack. (Science is cool.)

The biggest problem with boogeymen isn’t that they keep us up at night, it’s that they aren’t real. It’s fine to be scared of the threats actually knocking at your door, but healthy fear turns into paranoia and dysfunction when you start sleeping with a gun under your pillow.

If you’re trying to lose weight, and you think processed foods will sabotage your progress, you’ve made your diet much harder, and for no reason. The truth is, your body doesn’t care whether the food came packaged or paper-bagged, whether it was labeled non-GMO or organic, or how many steps it took to get it from farm to table. How food affects your body is a matter of science, not propaganda. That’s why it makes more sense to track macros than “eat clean,” and to care about calorie-density instead of whether it’s “processed.” Talking macros is speaking to your body in a language it understands–and this keeps you from unnecessarily restricting foods you may enjoy or even need.

I hope it doesn’t seem like we’re arguing about semantics, or that it doesn’t matter how we feel about things like “processed foods.” It absolutely matters.

If we can recognize that it’s not the processing itself, but how we process foods that can be a problem, then we can find solutions. If we know looking at the nutrition label matters more than whether its canned, salted, or frozen, we’ll be free to eat as we please and still reach our goals. But if we think back-pedaling through history will save us, there’s a much longer, harder journey ahead.

So, when it comes down to deciding if processed foods are “healthy” or “unhealthy,” if we should embrace them, limit them, or avoid them, the answer is always going to be the same:

A resounding, unsexy “it depends.”