The Pre-Workout Nutrition to Optimize Your Workout 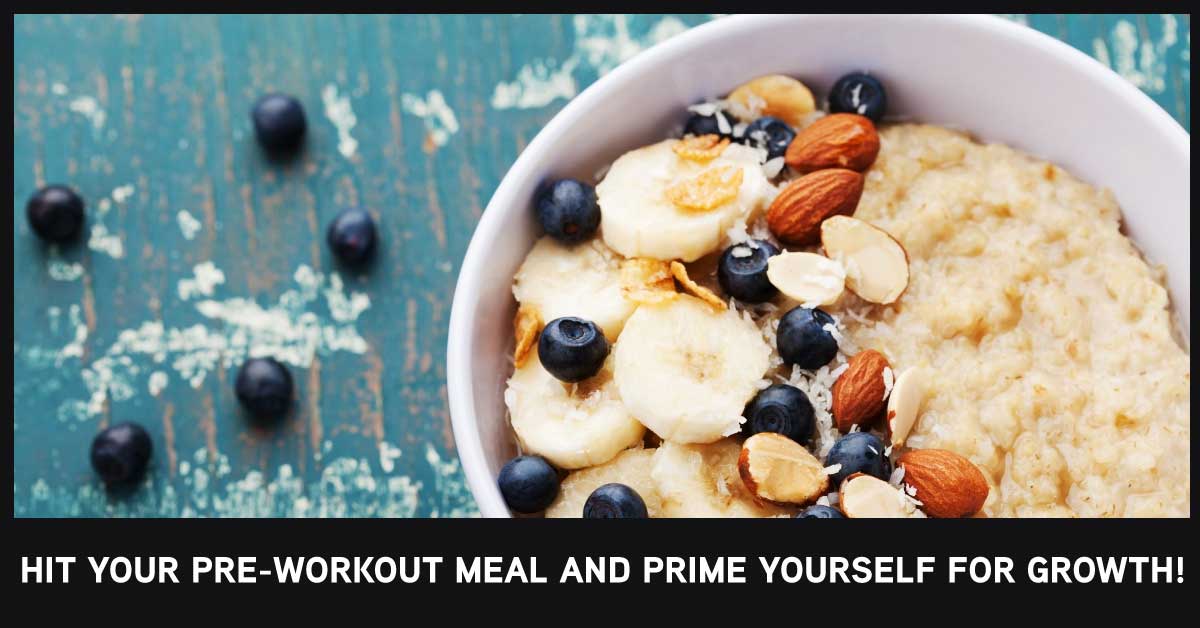 In fact, one study performed at the University of Texas suggested that pre-workout nutrition may actually be more important than post-workout nutrition in terms of maximizing anabolism. Whether that’s the case is up for some serious debate, but that’s a topic for another article. What’s clear is that consuming adequate protein to maximize muscle protein synthesis pre- and post-workout is a must if you’re looking for big-time gains.

Since many people have sensitive digestive systems and heavy whole-food protein sources can make them feel sick during a workout, it may be preferable to consume a whey shake one to two hours before a workout since it’s a high-quality protein source that’s rich in leucine and easy to digest. If you prefer whole food, however, that’s fine, but you may want to wait a bit longer (two to three hours) before working out.

Carbohydrates are probably the most controversial macronutrient in terms of recommendations, and with good reason: everyone tolerates them very differently. Some bodybuilders need 800 grams of carbs per day just to maintain their weight, and others put on fat like a bear about to go into hibernation from anything over 200 grams of carbs. So there’s a wide range of carbohydrates that encapsulate what may be optimal for your daily intake. For the longest time, it was theorized that you needed a large dose (75–100 grams) of a simple carbohydrate such as dextrose to maximize muscle protein synthesis and muscle glycogen content.

“Carbohydrates in and of themselves aren’t anabolic”

Recent research from the University of Texas Medical School suggests that far less carbohydrate may be required to maximize the protein synthetic response when combined with amino acids/protein than previously thought. These researchers gave amino acids (i.e., the building blocks of protein) with either 30 grams or 90 grams of glucose and measured rates of muscle protein synthesis. They found that both treatments maximize the anabolic response in the muscle.

Based on these data, it seems that, in adults, glucose and insulin only need to be present in modest amounts to maximize muscle protein synthesis. That said, there are a few things to keep in mind.

What this new research does mean is that for people who don’t tolerate carbohydrates well or those who are calorically restricted while dieting, they aren’t missing out on major anabolism by not drinking 100 grams dextrose solutions pre- and post-workout. In fact, since insulin really only needs to be modestly increased, it’s quite likely that moderate- level GI carb sources such as oatmeal, fruits, or rice will be sufficient to maximize the protein synthetic response when combined with protein while possibly preventing excess fat gain that may be associated with consumption of large amounts of high-GI carbohydrates such as dextrose.

Fat is probably the least important macronutrient where pre-workout nutrition is concerned. Out of the three macronutrients, it’s probably most wise to limit fat compared to protein and carbohydrate intake for a few reasons.

First, because you will likely be consuming a greater proportion of carbohydrate intake with your pre-workout meal compared to other meals during the day, you don’t want to combine that with a high fat intake, as greater levels of insulin will drive more dietary fat into fat cells, exactly where we do not want it.

Third, high-fat meals have actually been shown to also reduce testosterone release, and that’s obviously another hormone we would like to optimize for exercise.

Fourth, fat slows gastric emptying and will reduce the rate at which nutrients reach circulation, which may be advantageous at certain times of the day, but not before a workout, as we want the nutrients from our pre-workout meal to flood the bloodstream and reach the muscles without impairment in order to optimize the anabolic response. Slowed digestion may also cause gastric distress and stomach aches during training due to more digested food being present in the gut, which is also something we want to avoid for optimal performance.

While less glorified than the post-workout meal, pre-workout nutrition obviously is very important for maximizing the anabolic effect of a training session.

We suggest eating a pre-workout meal with adequate protein and carbs to maximize anabolism and limiting fat below 10 grams anywhere from one to 2.5 hours before a workout depending upon how your digestive system tolerates food before a workout and how fast the foods you choose digest.

Whey and liquid carbohydrate can be consumed much closer to a workout than something like a chicken breast and oatmeal. Both can work well; they just need to be timed accordingly. Now hit your pre-workout meal and prime yourself for growth!