Micronutrients: What They Are and Why They Matter 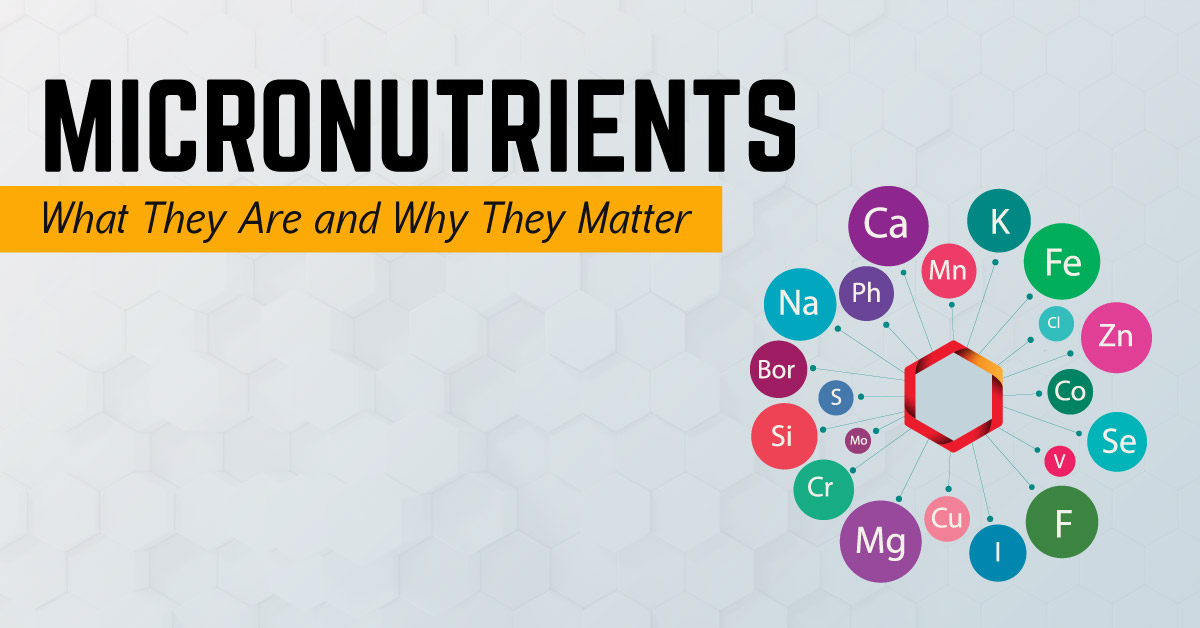 They say it’s the little things in life you treasure.

If you’re familiar with Avatar Nutrition, you know we like to take care of the big stuff—your protein, carbs, and fat—that control whether you reach your goals and stay there. But what about all the “little things”? What about servings of fruits and vegetables? What about “eating healthy”?

The truth is that, when it comes to pure health, things besides macros and exercise do matter. And if your goal is to really fine-tune your nutrition, you’ll need to talk to the macros’ little cousin: micros.

Micronutrients are made up of vitamins and minerals, which we need in much smaller amounts than macros. They don’t give your body energy directly, but you need them to use the energy you get from macros.

In most cases, having low or deficient micros comes from not eating enough food or variety. That said, the average person shouldn’t have a problem. In 2012 the CDC found that less than 10% of Americans had nutrient deficiencies [13]. However, vegetarians and vegans may be at greater risk for deficiencies than the rest of us [1,2].

Even if you’re not deficient in any micros, being aware of how important they are and where to find them can be a nutrition gamechanger.

Plus, understanding what our food does for our bodies is really cool—or maybe I’m just a nerd!

(There’s a lot of great information here, but if you want a highlight reel that nobody should miss, read the sections on sodium, iron, and potassium!)

Vitamins are organic compounds your body needs to function. They can be water-soluble (which means they aren’t stored if they aren’t used) or fat-soluble (which your body can store in fat, so you don’t have to eat them as often). Here’s a quick look at two of the most important ones: vitamins B and C.

The B-Complex Vitamins are actually eight water-soluble vitamins that are referred to as a group. Although they have their differences, they’re closely related and often work together. They play an important role in converting food to energy, maintaining healthy skin and hair, ensuring proper brain functioning, and maintaining a healthy nervous system [3].

The B-Complex Vitamins have two functions directly related to exercise. Half of them are used during exercise to produce energy and the other half are required to produce red blood cells, perform protein synthesis, and repair tissues.

Foods rich in B vitamins include eggs, most meats, green leafy vegetables, lentils, brown rice, watermelons, and whole or enriched grains and cereals.

RDA (Recommended Daily Allowance): This is variable, depending on the B Vitamin. It ranges from a few micrograms to several milligrams.

Vitamin C, the easy name for L-ascorbic acid, is another water-soluble vitamin. It can’t be synthesized by the body, so we have to get it from food. It plays a vital role in producing collagen, which is used to heal wounds and support blood vessel walls. Vitamin C is also involved in the production of certain neurotransmitters, such as serotonin and norepinephrine, which both play an important role in stress reduction, mood regulation, and mental clarity [4].

L-ascorbic acid is an antioxidant, meaning it helps our body fight back against certain illnesses and diseases and gives our immune systems a healthy boost. Ongoing scientific research is also looking into whether vitamin C can help prevent or fight against certain cancers [4].

To get plenty of vitamin C, eat plenty of fruits and vegetables. Citrus fruits, peppers, and tomatoes are all high in vitamin C.

If you’ve ever felt like rocks were your friends, you’ve come to the right article. Unlike vitamins, minerals are inorganic compounds (basically tiny rocks and metals) that our organic bodies need to grow strong bones and teeth, control body fluids, and turn food into energy.

Sodium, potentially the most controversial micronutrient in the fitness and nutrition world, helps to control blood pressure and volume, while also helping your muscles and nerves work properly.

Alone among micros, sodium can affect your body composition. Because sodium has no calories, it can’t cause you to gain fat. However, it attracts water at the chemical level, which leads to water retention and may then lead to weight gain (but not fat gain). This can make the numbers on the scale go up after a day of heavy salt intake, even if you hit all your macros perfectly. These effects are temporary, though, and will go away within a day or two if sodium intake goes back to normal.

Sodium is an electrolyte that works with potassium to maintain fluid balance in cells and keep your body hydrated and healthy. When you sweat and urinate your body loses electrolytes—precisely why proper sodium intake is key for rehydrating after a workout.

However, going overboard can have drastic effects on your health. And that’s a problem because, between 2009 and 2012, 90% of people in the U.S. exceeded the recommended daily allowance for sodium [14]. Studies show that reducing your sodium intake leads to lower blood pressure and is associated with reduced risk of stroke and coronary heart disease [12]. Everyone needs salt in his or her diet, but for people 51 and older, African Americans, and people with diabetes, high blood pressure, or kidney disease, the amount needed may be lower.

Foods with an acceptable amount of sodium include beets, celery, spinach, and most meats.

When you think of calcium you probably picture a “Got Milk?” billboard advocating for drinking dairy and building stronger bones. The general premise is correct: calcium is vital for strong bones and teeth. But that’s not all. It’s also important for muscle control and blood circulation. That means proper calcium intake is key for active people.

Insufficient calcium intake can lead to decreased bone mass and even fractures [5]. Later in life, it can lead to osteoporosis, especially in elderly women. Without a strong skeleton, our muscles can only do so much. So, although eating plenty of calcium won’t lead to your next “pump,” it will serve your body well for years to come.

Milk, yogurt, cheese, and other dairy products are our greatest sources of calcium, but you can also get it from kale, tofu, soft-bone fish like sardines and salmon, broccoli, and calcium-fortified cereals and juices.

Chromium is a mineral we only need in trace amounts. It’s been shown to enhance the action of insulin, the hormone that controls blood sugar. It also plays a role in the metabolism of carbohydrates, proteins, and fats, although its exact role is still unknown [6].

There have been articles floating around for a while advocating chromium as a supplement for weight loss. Disregard, burn, or shred these articles—there is no scientific evidence to back these claims and in fact, plenty of reasons not to supplement. Since humans need such a low amount of chromium, it’s rare that people are truly deficient in it.

Foods like meat, fruits, and vegetables are good sources of chromium.

Iodine, a trace mineral found in some foods and added to others, is essential to produce the thyroid hormones T3 and T4 [7]. These hormones regulate many biochemical reactions such as protein synthesis and enzyme activity. Because of its direct association with our metabolism, many people with thyroid problems either can’t gain weight or can’t lose weight.

Proper iodine consumption is one way to keep our thyroid hormones functioning at healthy levels [7]. Though naturally found in soil and seawater, humans can get their iodine fix from iodized table salt, dairy products, seafood, meat, some breads, and eggs. If someone is on a salt-restricted diet, they can also supplement with a multivitamin containing iodine.

Iron is vital for almost all living things. It’s involved in a wide variety of metabolic processes, including oxygen transport, DNA synthesis, and electron transport [8]. Without iron, your muscles can’t get the proper amount of oxygen needed to work efficiently, due to a lack of red blood cells.

A low red blood cell count is known as iron deficiency anemia. Anemia is associated with higher rates of mortality, low exercise tolerance, and a reduced quality of life [9]. Those at highest risk for anemia include the elderly, reproductive-age and pregnant women, Hispanics, and non-Hispanic blacks. Symptoms of anemia include fatigue, weakness, pale or yellowish skin, cold hands and feet, and headache. If you’re experiencing these symptoms it may be time to check with your doctor.

However, most people should be able to get enough iron from the foods they eat. Iron-rich foods include liver, red meats, eggs, iron-fortified cereals, nuts, seeds, dried stone fruits, and beans.

Potassium is found everywhere in the body and is essential for normal cell function. Proper intakes of potassium have been linked to lower blood pressure, lower risk for coronary heart disease, and lower risk of stroke [10].

Studies have shown that eating more potassium and less sodium can have tremendous effects on our overall health [11]. The same studies show that because many Americans follow a traditional Western diet (low in fruits and vegetables), they’re not getting the proper amount of potassium needed to fully benefit.

Micronutrients play a key role in optimal health; without them, our macronutrients would be useless. Just don’t forget: While there’s nothing wrong with chasing micros to really dial-in your nutrition, keep on eye on quantity as well as quality. Both are important, but achieving your goals means focusing on the right things at the right time.

(For more on this, check out “Why You Should Actually Prioritize Quantity Over Quality.”)

The good news? You don’t really have to choose between quantity or quality. Aside from eating a well-balanced diet (and enough food in general), there’s not much you need to do to keep your micros in check.

1. Elorinne A., Alfthan G., Erlund I., et al. Food and nutrition intake and nutritional status of finnish vegans and non-vegetarians. Plos One 2016 February; 3(2): 11.

2. Pawlak R. Is Vitamin B12 Deficiency a Risk Factor for Cardiovascular Disease in Vegetarians? American Journal of Preventive Medicine, 2015 June; 48(6) 11-26.

4. Carr A., Frei B. Toward A New Recommended Dietary Allowance for Vitamin C Based On Antioxidant Effect in Humans. American Journal of Clinical Nutrition, 1999 June; 69(6) 1-4.