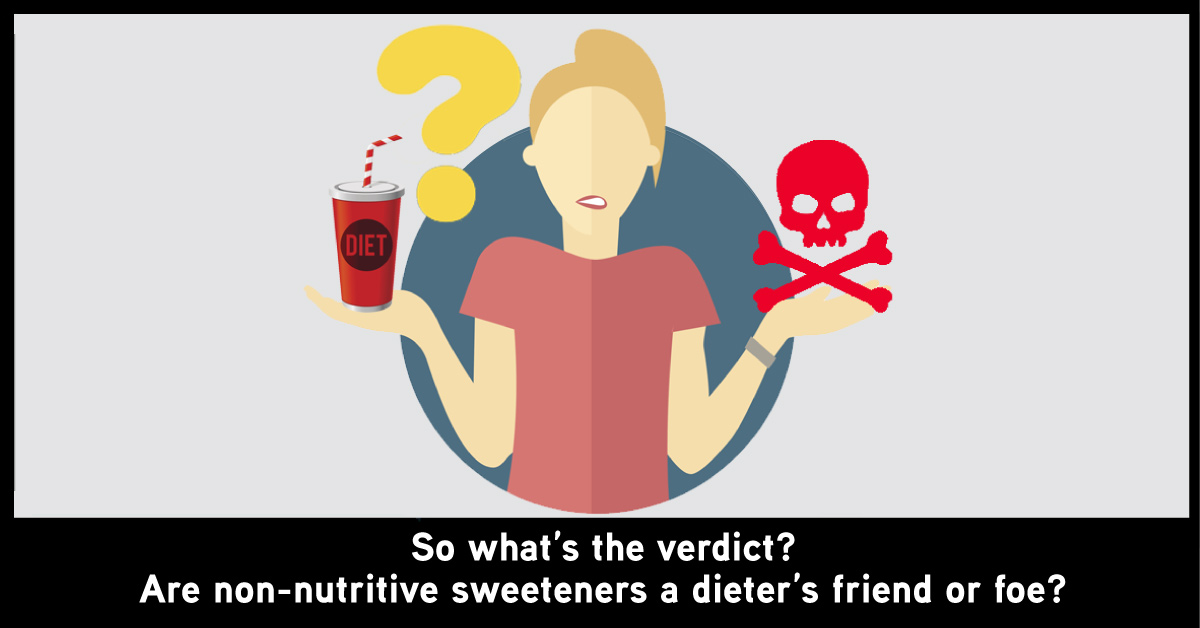 With the rising popularity of low-carb diets, sugar is often demonized as to the reason for obesity and failed weight loss.

So it’s no surprise that artificial sweetener use has risen over the past couple of decades [1]. Replacing sugar with non-nutritive sweeteners seems like a simple way to reduce calories and cut down on sugar, but the internet is full of articles warning about the dangers of sugar substitutes. So, what’s the verdict? Are non-nutritive sweeteners a dieter’s friend or foe?

What Are Artificial Sweeteners?

We add sugar to foods and beverages to make them sweeter. Each gram of sugar has four calories, which can really add up in foods that contain dozens of grams per serving. In contrast, non-nutritive sweeteners are often hundreds to thousands of times sweeter than sugar and have virtually no calories [2]. There are many non-nutritive sweeteners on the market, with the most popular including aspartame, sucralose, and stevia. If you look at food labels, you’ll find that these ingredients pop up all over the place, especially in dietary supplements and low-calorie versions of sweet foods.

I’ve been using the terms “artificial” and “non-nutritive” somewhat interchangeably. That’s because stevia—a common zero-calorie substitute for sugar—is actually a “natural” sweetener. So, I’ll use “non-nutritive sweetener” to include all of the super-sweet, virtually calorie-free options. They all do the same thing: make things sweet without adding calories.

A common accusation thrown at artificial sweeteners is that they cause cancer. These claims aren’t totally baseless. There have been several studies investigating how a variety of sweeteners affect cancer risk, and a few of them have reported a significant increase.

But most studies have found no relationship between these sweeteners and cancer. In fact, the few observational or rodent studies that suggested a link between them and cancer have been widely criticized by the scientific community. A recent paper that looked at all the available human studies concluded that, overall, there’s not enough evidence linking non-nutritive sweeteners to cancer [3].

That’s why the FDA has approved the following non-nutritive sweeteners for safe use in food:

If this looks like a long list, you might think it means that the FDA will approve any sweetener. But that isn’t true. For instance, the FDA used to allow using cyclamate (starting in 1958) but later banned it (in 1969) after evidence arose that it increased bladder cancer in rats [2]. (Even now, the European Union and over 100 total countries still allow the use of cyclamate in food [4].) Keep in mind that government agencies are constantly evaluating and reevaluating the evidence on non-nutritive sweeteners. The fact that we’ve accepted the ones we have reflects science’s confidence in their safety.

Effects on Body Weight and Metabolism

If you replace sugar with a non-nutritive sweetener, you could make a major impact on your daily calorie intake. For instance, a person who drinks two bottles of Coke per day could drop over 400 Calories and 100 grams of sugar by switching to Diet Coke or Coke Zero, without feeling like they made a big sacrifice! That’s assuming, however, that non-nutritive sweeteners are as good as they seem.

Some researchers have suggested that “false sweeteners” may worsen our metabolism by influencing the bacteria in our gut, altering our ability to control blood sugar, or “confusing” our brain’s reaction to sweet tastes [5]. Theoretically, this “confusion” could affect digestion, blood glucose regulation, cravings for sweet foods, and our body’s ability to determine how much energy we’ve consumed. The big concern is that non-nutritive sweeteners may interfere with blood glucose control and make us eat more sweet foods, both of which could hinder a dieter’s weight loss goals.

Luckily, the current evidence suggests that these fears are largely unfounded [1]. There’s a possibility that non-nutritive sweeteners might slightly shift someone’s preferences toward sweeter foods [4], but there’s no evidence that this causes people to overeat. In fact, some studies have shown we can use these sugar substitutes to eat less without compensating later [6].

Having said that, it’s important to understand that non-nutritive sweeteners don’t do anything magical. They don’t curb your appetite or create fat loss automatically. They only work by helping you reduce your daily calories [4]. As a strategy to support weight loss, studies have shown non-nutritive sweeteners to be somewhat underwhelming [7]. That means that adding a Diet Coke to your normal diet won’t help—but replacing a regular Coke with a zero-calorie version can support your progress by lowering your calorie intake for the day.

There are plenty of articles on the internet about how terrible non-nutritive sweeteners could be, but very few scientific studies suggesting that they are. One of the great (and frustrating) things about science is that verdicts are never final. These ideas are always evolving based on the current evidence. But the current evidence suggests that non-nutritive sweeteners aren’t dangerous when consumed in reasonable doses. Better yet: they can support weight loss goals by helping reduce overall calories.

So, unless some earth-shattering research convinces us otherwise, we have good reason to say that artificial sweeteners are a friend, not a foe.