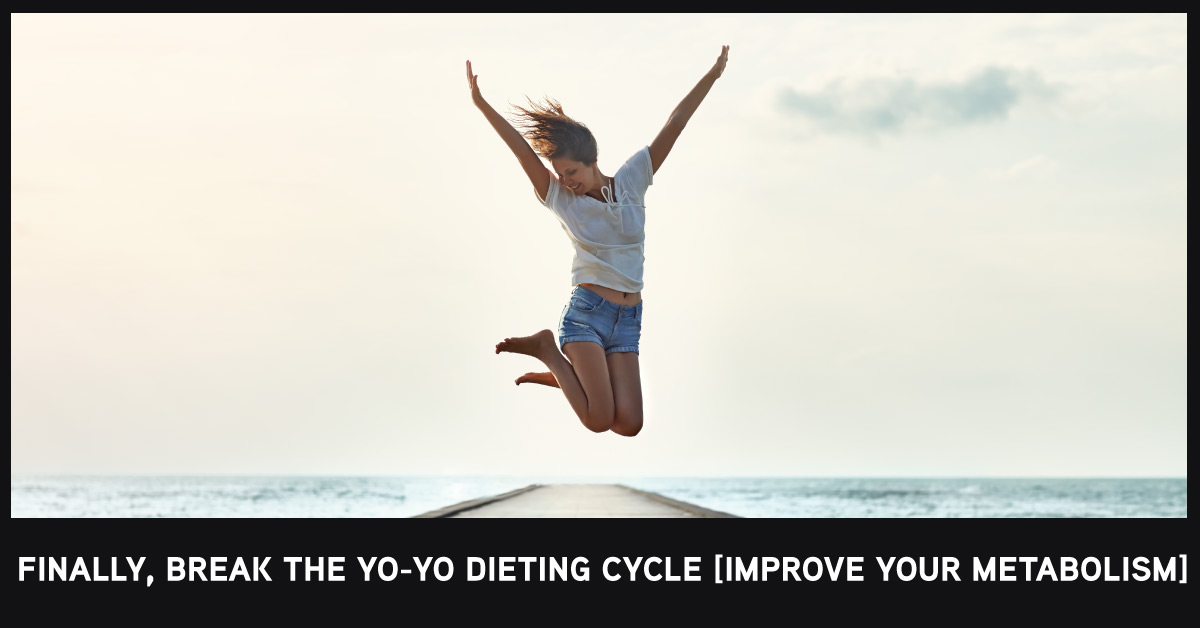 Yo-Yo Dieting is extremely stressful on your body.

Aside from the obvious hunger, tiredness, lethargy, and growing obsession over food, you also run the risk of messing with your hormone production, losing muscle mass and strength, and lowering your metabolic rate.

While these are all part and parcel of dieting to a degree, spending too much time dieting or in a calorie deficit will greatly increase these risks, making future weight loss much more difficult.

This is where reverse dieting comes in.

The concept is to gradually raise calories and drop cardio so that you get your metabolism back on track, start gaining lean muscle and feel stronger physically and mentally. How quickly you raise calories depends on your goals, but the key is to go fast enough so that you don’t feel like you’re still dieting for months on end, but not so fast that you gain excessive amounts of unnecessary body fat.

Due to the greater prominence given to reverse dieting in recent years, more and more people are getting the message that they can’t just keep dieting and that reversing is critical for both the body and mind.

The trouble is, most people don’t reverse diet for nearly as long as they should. Many think that as little as 6 to 8 weeks is enough before dieting again, but the truth is that it takes much longer than this.

A History of Extreme Dieting

It’s a sad fact of fitness that many people undertake extreme diets year after year and get into a cycle of trying to be lean all the time. This is common among competitors who want to step on stage every year or models who do shoots every few months.

But this line of thinking isn’t just limited to physique athletes. There are plenty of people outside of the fitness realm who have been on and off the fat loss bandwagon their entire lives.

Extreme dieting is usually linked to a drastic cut in calories and carb or fat intake, the elimination of entire food groups, or blindly following a meal plan with no consideration of macros. But there are also flexible dieters who subject their bodies and metabolisms to the perils of reckless dieting, spending the majority of each year in a deficit.

“When you return to a higher calorie intake, your body is primed to gain excess fat”

Doing this can result in adaptive thermogenesis, where your body acclimates to a lower calorie intake. To survive on less food, your organs start to use less energy, fewer calories are used for hormone production, and your subconscious activity levels drop [1]. Even your muscles start to use fewer calories during exercise. As a result, when you return to a higher calorie intake, your body is primed to gain excess fat [2,3].

To prevent this from happening, a reverse diet is required.

Reverse dieting correctly can reignite your metabolism and repair any damage done to your hormone levels when dieting, but it’s not an overnight fix. It’s going to take time, and it certainly can’t be done in a matter of a few weeks.

Realistically, depending on how extreme the diet, how long you dieted for, and how high you jacked up your activity, it might take 6 months or even a year of reverse dieting and holding calories high for your metabolism and health to recover.

To show just how debilitating a diet can potentially be, researchers from The University of North Carolina carried out a 12-month case study on a natural bodybuilder. You can see the results of the diet below:

This makes it clear—If you diet down to a very low level of body fat, you can’t just increase your calories again and expect to return to normal in a matter of a few months.

With the bodybuilder in the case study, 5 months after his diet, he was heavier than when he began, but his resting metabolic rate was lower. His calorie intake and body fat had returned to pre-diet levels and he’d even gained some muscle, but his metabolism was still lagging behind. Likewise, his testosterone, T3, and T4 levels still weren’t back to normal yet [4].

While this is an extreme case using someone who got to competition levels of body fat, it demonstrates that after you diet, you’ve got to give things time to settle down and get your health back before you even think about getting lean and cutting calories again.

How Long Should You Reverse Diet?

Like almost every other question in fitness, the answer is “it depends.”

You need to reverse diet long enough to get healthy again and to eliminate obsessive thoughts and behaviors related to food, but not so long that you start to gain fat without seeing any noticeable increases in strength and muscle size.

The length of a reverse diet depends on how you felt during and after the diet, as well as your long-term goals.

If you got extremely lean and/or felt the effects of the calorie deficit to a high degree—for example, experiencing a drop in libido, insatiable hunger, fatigue, and big drops in energy and performance—you will need to reverse diet for at least 6 months, if not longer.

For those who’ve just dieted to get beach ready or lose a few pounds for an event, and aside from feeling a little hungry haven’t felt too exhausted or downtrodden, 3 months might do it.

Your best bet is to reverse for as long as you can without adding excess body fat.

One of the other (often overlooked) factors is the length of time you’ve been dieting for. Now, this doesn’t necessarily just mean however long you tried to spend in a deficit, it also refers to your dieting mentality throughout your entire life. We strongly suggest that those who’ve tried to diet over and over again, year after year, also take longer to reverse to repair the damaging effects that such an approach brings.

Hit a Peak…and Stay There for a While!

Here’s something you hear a lot of people say:

You can replace that 3,000 with whatever number you like, but typically, the figure quoted will be one that sounds extremely high for the person in question. What has usually happened here is that the reverser has legitimately gone this high with their calories, but only stayed there for a week or two.

After reversing, it’s critical to keep calories at their high point for at least a month or two before trying to diet again. Doing this will give your body and metabolism time to adjust to your new, higher food intake.

Think of it this way, just because you jumped up and touched a high-calorie intake doesn’t mean that your metabolism has actually adapted to that intake. If you hit your peak and go straight back to a deficit, odds are that your body will be less responsive than you hoped. To ensure a successful reverse, you should hit your peak and stay there for a while.

Overcome the Fear of Losing Your Abs

Reversing is as much a mental process as a physical one. Slowly adding in calories and dropping cardio really isn’t rocket science, but dealing with the idea of losing your leanness can be scary.

But here’s the thing—you got lean once and you can get there again.

It’s tempting to slash calories and add cardio as soon as you see that your body fat is going up slightly, but remember that a longer, steady, consistent reverse will put you in a much better place to diet again in the future.

Not only are you doing the best thing for your health by not forcing your body to constantly diet, but you’re giving yourself the opportunity to gain more lean mass, eat more food, improve your metabolic rate, and have an easier time dieting the next time you want to get lean.

If that isn’t a reason to spend a good few months reversing, I don’t know what is.